From the Crow's Nest
A blog to follow Anthony's book writing 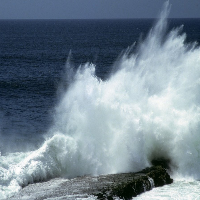 The main plot of the story has those pirates in them. But it also has something a little more modern day. Something a little more recognizable. The story is actually going to start off on a cruise ship. One of those big, rich people sort of lounge kind of cruise ships, that people pay a huge amount of money to go onto to forget about their life. It starts around a girl that’s working as a hostess/deckhand, but the cruise ship goes down in the middle of the ocean. She was on the ship as it went down, unable to make it onto the escape boat.

She wakes up in a dark and misty world, on top of a dark wood deck. There were splinters sticking up everywhere, and the sails on all three masts were tattered and wind torn. And there was only one man aboard the ship that she could see, at first; A tall man, standing behind the tiller on the stern of the ship, beard covering most of his face. The crash of the waves threw and pitched the ship, making it rock in a way far different than she was used to.

The woman was weak, however, and only managed a few moments of looking around before she passed out again on the dark ship. This time, when she awoke, she was once more in the bright ocean of the world that she was used to. The girl was floating on a piece of the white cruise ship, eyes flickering open and closed, unsure of what was going on.

Eventually, you see that she goes back and forth between these two realities. One with pirates, and the other with her floating in the middle of the ocean waiting for some sort of rescue. And you discover the small things that make these two worlds different, but the major thing that separates the two worlds isn’t revealed ‘til the very end.
Powered by